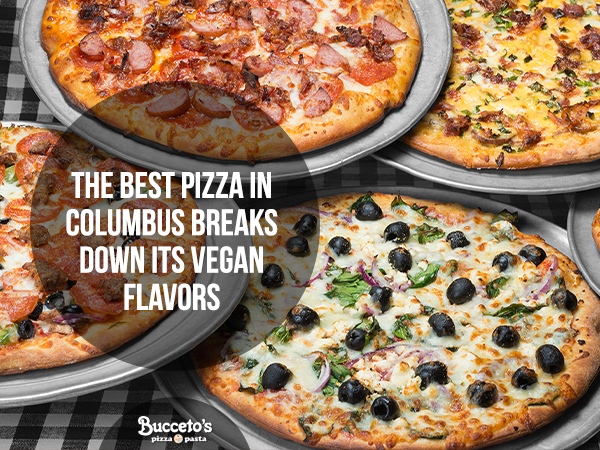 The Best Pizza In Columbus Breaks Down Its Vegan Flavors

Our best pizza in Columbus at Bucceto’s is traditional, it’s gluten-free, and now it’s going vegan! While we’ll still have our gluten-free and traditional pies, we encourage our customers to give our new vegan pizza a try. If you’ve never had vegan pizza before, we want to breakdown the flavors so you can get a feel of just how tasty this Bucceto’s creation really is!

First and foremost, it all starts with our crust. You can choose a traditional crust or our gluten-free crust, so it’s a great option for those with gluten intolerances as well as vegan dietary needs. The crust is our own Bucceto’s recipe, with the no gluten option using wholesome rice flour compared to the classic’s traditional flour. Regardless of the crust you choose, you can bet it’s going to be hearty, tasty, and have plenty of that toothsome crunch.

On top of the crust is the sauce. Our sauce is made with a blend of wholesome fresh tomatoes and our own blend of Italian herbs and seasoning. It gives a flavor that is a little sweet, quite robust, and perfectly acidic to cut the fat and the salt flavors in the cheese. The sauce is what really holds the balance in our best pizza in Columbus either traditional or vegan-style.

The cheese is where the differences start to show in our vegan pie! Vegan cheeses are made with non-dairy milks, but aside from using a non-dairy option the process is quite similar to traditional cheese making. This gives vegan cheese the same textures and flavors most are used to from their favorite cheese classics. Our vegan cheese is still salty, stretchy, creamy, and satisfying, it’s just made from plant-based non-dairy milk.

After the cheese is the toppings. With dozens of toppings to choose from, you can go the veggie route or you can try our new vegan sausage. The vegan sausage is made using plant based ingredients, but it has all of the same traditional spices that are used in classic meat-based sausage. This gives the sausage that perfect authentic smokey spicy flavor but it’s entirely vegan friendly.

Our best pizza in Columbus is always branching out and trying new things. If you haven’t tried our new vegan pizza yet, we can’t wait to show you what it’s all about!