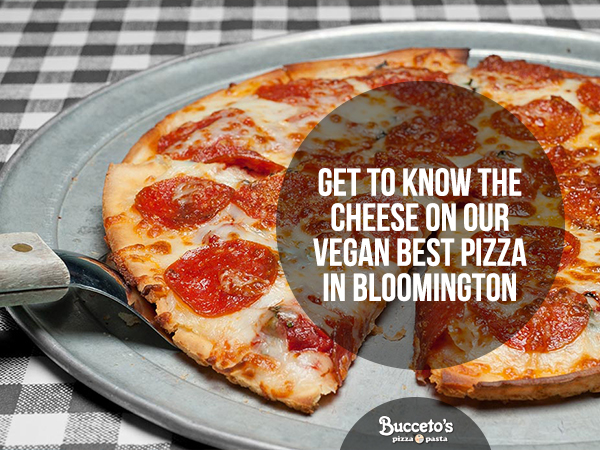 Interested, curious, excited – how do you feel when you think about our vegan pizza at Bucceto’s? At Bucceto’s we and our owner Paul Heilbrunn set out to make pizza an accessible treat for everyone, and this includes both our gluten-free and vegan crowds. Whether you’ve tried our vegan best pizza in Bloomington yet or not, we want to make it a little less mysterious!

The foundation for a great pizza is made up of 4 things. You have the crust, which is the actual foundation holding together all of the other ingredients. You have the sauce, which brings flavor, sweetness, a robust zing, and moisture to the pie. You have the cheese, the fan favorite that makes a pizza a pizza, and lastly you have your choice of toppings that let you customize every pie you order.

The crust is made with either traditional or rice flour. The sauce is made using fresh tomatoes, olive oil, and our unique blend of Italian herbs and spices. You can easily choose veggie-based toppings to create a vegan-friendly pizza, but what about that last part? Traditionally, cheese is made with milk, a non-vegan friendly ingredient, but we’re setting the bar higher with our own blend of tasty, stretchy, salty, and satisfying vegan cheese.

While dairy milk is the traditional way to go in cheesemaking, that doesn’t mean cheese cannot be made with other kinds of plant-based milks. Vegan cheese is made in a very similar fashion to traditional milk, and it all starts out with the plant-based alternative of choice alongside bacterial cultures to separate the proteins. Vegan cheese will undergo an aging process in order to create cheese, and often be combined with oils, thickeners like arrow root or pea flour, and emulsifiers to give it that perfect cheese texture. While we use pizza-friendly melty cheeses on our vegan pies, vegan cheese can be soft and spreadable like cream cheese, hard like cheddar cheese, and even creamy and fluffy like ricotta or mascarpone.

If you’ve never had vegan cheese before, there’s no better way to give it a try than with our vegan best pizza in Bloomington. If you’re in the market for something a little different tonight, we can’t wait to make you the vegan pie we’re proud of at Bucceto’s!